Keep everything in order by adding dependencies to tasks. These allow you to define the order in which a series of tasks much be actioned, so you can practically see your upcoming duties in relation to other deadlines on your timeline.

Gantt timeline has had an upgrade!

Project delayed? Simply edit your task dates and your dependent task dates will automatically adjust. Switch on ‘auto-update dependencies’ in the task board options to try it out.

Dependencies are currently only available within your main Task Boards, not "My Planner"


1. Click or hover over the task you want to add a dependency to.

2. On both ends of the task, you will see a white circle. This is where you create a dependency.

4. You will now see a connection between the two tasks. The connection will show at the start of the earliest task and end of the latest task.


Auto-update will ensure that when you edit the task dates the dependant task will automatically adjust.


To turn this feature on, open the board options on your task board and turn "Auto-update dependancies" to on. 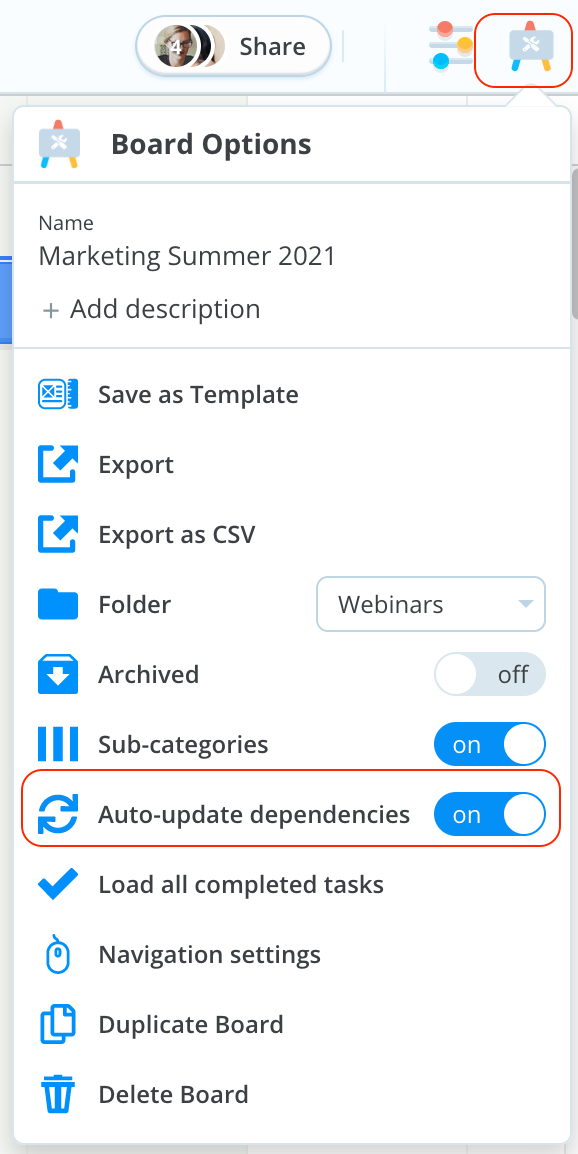 If you don't wish to use this feature, turn "auto-update dependancies" to off.


When 'auto-update dependancies" is on, moving a task on the timeline or editing it's due start and due date will automatically update the dependant task, keeping the same duration of days between the tasks.


1. To delete a dependency click on the dependency so that you can see a faint highlight.

*To delete dependency on Mac, please click on dependency and then backspace+Fn.


2. On your keyboard, tap "Delete". You will then be asked to confirm the deletion.

3. The dependency will now be removed from the timeline.